Slower than some, better than most 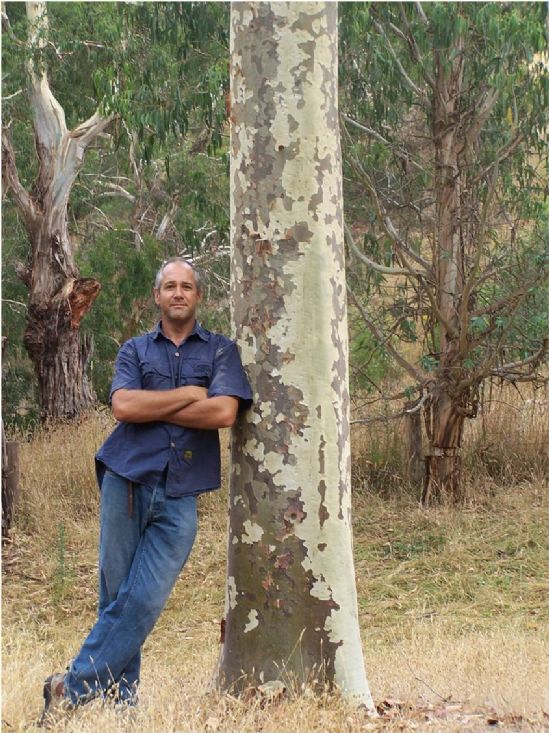 Rowan with one of the Spotted Gums he planted in 1987. When this photo was taken in 2006 it over 47cm in diameter. The tree has been pruned to 6m to produce high quality timber and will be ready for harvest when it reaches 60cm in diameter. But then again its other values might mean it stays for much longer.

For a tree grower it pays to be patient.

After the recent drought and a fires tree farmers who I have been working with for years are telling me that their favourite species is not the fast growers but the sure bets. Many mention Spotted Gum. It all comes down to risk.

Spotted Gum's natural range spans the temperate and the sub-tropical zones up the east coast. Without the reliable winter rains of the south or the summer rains of the north farms and forest in this zone commonly suffer extended droughts. Drought is exacerbated in the Spotted Gum areas by high evaporative demands and shallow well-drained soils. For a tree species to survive it must be able to shut up shop, resist insect attack and sit it out till the rains come.

The relatively slow early growth of Spotted Gum is simply a reflection of its conservative water user. Most of the high rainfall eucalypt species will use all the available water to drive rapid growth. If they run dry, drought stress makes them more susceptible to insects and disease and can result in rapid death. Over a rotation of many years this conservative water use strategy means that Spotted Gum is likely to eventually out grow most other gums in dry areas.

Spotted Gum have a number of characteristic that not only help the them survive an intense fire but also limit its intensity. Firstly, the clean white bark is thicker than most other gum species and better protects the sensitive cambium layer. The outer layer of bark peels off in patches rather than ribbons and the lower branches die off leaving a clean bole that reduces the risk of fire been carried up the stem into the canopy. If the canopy is damaged the tree can sprout new leaves from the base (coppice) or branches (epicormic shoots).

Spotted Gums Achilles' heel is its susceptivity to frost so it should no be planted in frost hollows. Whilst resistant to phytophthora fungus it is susceptible to ramularia shoot blight in humid summer rainfall areas.

Based on the large qualities harvested from native forests Spotted Gum is a well regarded and valued flooring timbers. Being moderately durable it is safe to use for decking but not in the ground. In my own house I used it for flooring in our kitchen where the light brown to gold colouring mimics the honey colour of Tasmanian Blackwood cabinets. Knowing of its bending properties I also used Spotted Gum in our curved laminated window frames.

Sawing trials of plantation grown timber suggests that Spotted Gum is more stable and less susceptible to drying degrade than most other gum species. This means that the logs can be easily milled on farm using portable mills and dried in a solar kiln without the need for expensive reconditioning facilities. The pale sapwood is susceptible to Lyctusborer so must be removed or treated with an insecticide such as boron prior to sale.

Spotted Gum as a farm tree

Gum has proven to be less competitive with pasture than most eucalypts. The thick bark also resists ringarking making it an ideal shade tree for sheep and cattle. Its clean attractive appearance has made Spotted Gum one of the most commonly grown ornamental gum trees in both urban and rural areas. Marrying its utility with its ornamental values means that it is one species that can be used to extend the homestead garden out into the farming paddocks thus enhancing the aesthetic appeal of the whole farm.

Even outside its natural range, Spotted Gum provides food and shelter for wildlife. It is a favoured koala fodder trees and sugar gliders seem to love its sap. Understorey shrubs and native grasses also grow well under the canopy allowing timber production areas planted out with local shrubs to create wildlife refuges.

If we evaluate species on the basis of risk, rather than simply growth rate, Spotted Gum is a standout eucalypt for many thousands of farmers across Australia. If you can find mature examples planted as street trees and in gardens around your area then maybe you should consider giving it go.

Genetic research and breeding is beginning to highlight promising strains with better form and vigour but there is no way of really knowing which seed lot is best for you. At this stage it is worth planting a range of seed lots and then thinning down to the individuals that perform best on your place.